George McGovern, former Democratic presidential candidate, was US ambassador to the UN Food
and Agriculture Organization in Rome, under former President Bill Clinton. He made the following observations in 2000.

I take an interest in advancing the well-being of the world. That is why I am pressing for a universal school lunch every day for every child in the world.

I would like to see the United States take the lead in securing a commitment to that objective in the United Nations. Dollar for dollar a daily nutritious meal for the 300 million hungry school-age children of Asia, Africa, Latin America and Eastern Europe will accomplish more in strengthening humans than any other kind of assistance.

As matters stand, 130 million school-age children are not in school and are destined for a life of illiteracy. Because of favoritism toward boys in much of the Third World, most of these children are girls. What is the surest way to draw these future citizens into the schools? Each time a school lunch is initiated, attendance doubles and sometimes triples within a short time. Parents encourage boys and girls to go to school to benefit from a nutritious lunch or breakfast. Of equal importance is the dramatic improvement in learning and academic achievement that follows the launching of a school lunch program. Imagine trying to teach a child who has come to school with little or no breakfast and must endure the school day with no lunch. Nutrition is a precondition of education.

Something else happens when school lunches are established. UN studies in six countries have revealed that illiterate females have an average of six children. It is commonplace for girls not in school to marry at ages 11, 12 or 13 years and begin having children. The same studies show that girls who go to school marry later and have an average of 2.9 children, whom they are better equipped to nurture and educate. 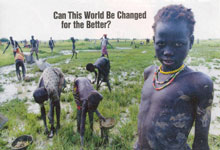 I believe those questions can be answered convincingly. Indeed, if our nation could set in motion a program to offer a nutritious meal every day for the children of the world that would literally transform life on this planet.

The American contribution would be largely in surplus farm commodities purchased by the secretary of agriculture that could include everything from wheat, corn, and edible oils to livestock, hogs, and poultry to dairy products, citrus fruits, nuts, and cranberries. The United States is the major farm surplus nation; others include Canada, Australia, France and Argentina. The farmers of all these countries would benefit substantially from a program that might eventually reach 300 million children. Farm markets and farm income are always depressed when surpluses over-hang the market. What better way to resolve this problem than by putting the surplus of food into the stomachs of hungry children?

Countries without farm surpluses could contribute cash or administrative personnel to assist in setting up the school lunch programs, or utensils and equipment, or shipping and ground transportation to move the food where it is needed.

Providing nourishment, health, and happiness to all of God’s children will cost each American only a few dollars. That’s a small price to pay. In the long run it will cost us a lot more if we let 300 million children remain hungry and poorly educated. How many Albert Einsteins, Marie Curies, Martin Luther Kings, and Michael Jordans will never develop if we do nothing to feed the hungry children of the world? Who can evaluate that loss?