So far, AIDS has killed 17.2 million Africans, and counting... the virus has created a generation of orphans 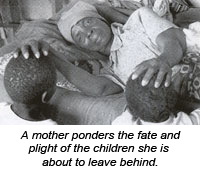 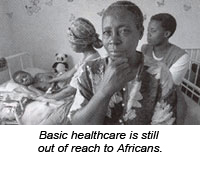 East and Southern Africa are the hardest-hit AIDS regions in the world. Here, the virus is cutting down more and more of Africa’s most energetic and productive people, adults aged 15 to 49. The slave trade also targeted people in their prime, killing or sending into bondage perhaps 25 million African people. But that happened over four centuries. Only 17 years have passed since AIDS was first found in Africa, on the shores of Lake Victoria, yet according to UN statistics (2002), the virus has already killed more than 11 million sub-Saharan Africans. More than 22 million others are infected.

Only 10% of the world’s population lives south of the Sahara, but the region is home to two-thirds of the world’s HIV-positive people, and it has suffered more than 80% of the AIDS deaths.

In the year 2001, the combined wars in Africa killed 200,000 people. AIDS killed 10 times that number. Indeed, more people succumbed to HIV last year than to any other cause of death on this continent, including malaria. And the carnage has only begun.

Unlike Ebola or influenza, AIDS is a slow plague, gestating in individuals for 5 to 10 years before killing them. Across East and Southern Africa, more than 13% of adults are infected with HIV, according to UN statistics. And in three countries, including Zimbabwe, more than a quarter of adults carry the virus. In some districts, the rates are even higher: In one study, a staggering 59% of women attending prenatal clinics in rural Beitbridge, Zimbabwe, tested HIV-positive.

Life expectancy in many African countries has been shortened to 47 years instead of 64 because of HIV-AIDS, according to the World Bank. HIV-AIDS “is quite literally robbing Africa of a quarter of their lives.”

In the West, meanwhile, the HIV death rate has dropped steeply thanks to powerful drug cocktails that keep the disease from progressing. These regimens must be taken for years, probably for life, and they can cost more than US$10,000 per patient per year. Yet in many of the hardest-hit African countries, the total per capita health-care budget is less than US$10.

Many of the misguided so-called African leaders, as well as people in the West, shrug off this stark and glaring disparity, contending that it is also true for other diseases. But it isn’t. Drugs for the world’s major infectious killers – tuberculosis, malaria, and diarrheal diseases – have been subsidized by the international community for years, as have vaccines for childhood illnesses such as polio and measles. But even at discounted prices, the annual cost of putting every African with HIV on triple combination therapy would exceed US$150 billion, so the world is letting a leading infectious killer for which treatment exists mow down millions.

That might be more palatable if there were a Marshall Plan for AIDS prevention to slow the virus’s spread. But a recent study by the UN and Harvard shows that in 1997, international donor countries devoted US$150 million to AIDS prevention in Africa. That’s less than the cost of the movie Wild Wild West.

In 2002, the Secretary General of the United Nations, Kofi Annan, asked for US$10 million per annum to fight the AIDS pandemic that claims three million people a day in Africa. He was only given US$2 million spread over three years. In three days, US$100 billion were raised for the 9-11 victims. SARS (Serious Acute Respiratory Syndrome) claimed less than 100 people worldwide, but it was hailed as a severe worldwide epidemic that had to be eliminated. The Mad Cow Disease, which has not claimed any lives, has been targeted for extermination with meticulous ferocity.

Meanwhile, the epidemic is seeping into Central and West Africa. More than a tenth of adults in Cote d’Ivoire are infected. Frightening increases have been documented in Yaoundé and Douala, the largest cities in Cameroon. And in Nigeria – the continent’s most populous country – past military dictatorships let the AIDS control program wither, even while the prevalence of HIV has climbed to almost one in every 20 adults.

Quite simply, AIDS is on track to dwarf every catastrophe in Africa’s recorded history. It is a stunning development, threatening the economy and transforming cultural traditions.

Why AIDS Is Worse in Sub-Saharan Africa

AIDS is worse in sub-Saharan Africa:

Indeed, historians lay much of the blame on colonialism for Africa’s many corrupt and autocratic governments, which hoard resources that could fight the epidemic. Africa, conquered and denigrated, was never allowed to incorporate international innovations on its own terms, as, for example, Japan did.

A Generation of Orphans

The AIDS-HIV epidemic has transformed kinship networks, which have been the heart of most African cultures. Orphans, for example, have always been enfolded into the extended family. But more than seven million children in sub-Saharan Africa have lost one or both parents, and the virus is also killing their aunts and uncles, depriving them of foster parents and leaving them to live with often feeble grandparents. In response, communities across Africa are volunteering to help orphans through home visits and, incredibly, by sharing the very little they have. Such volunteerism is both a reclaiming of communal traditions and their adaptation into new forms of civil society.

Africa We Care is dedicated to providing assistance and relief to the victims of AIDS-HIV and their care-givers. You can help us help Africa. Contact us: info@africawecare.org