One in 6 African babies dies before their first birthday 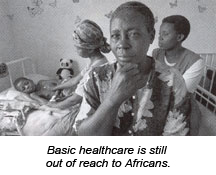 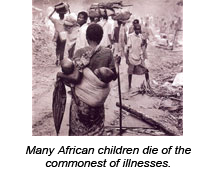 Since World War II, childhood mortality conditions in the sub-Saharan Africa continue to be the worst among all major global regions. For instance, while almost ALL children in the developed world survive through to their pre-school years, about a fifth of those in Africa die before reaching their fifth birthdays compared to 8 and 5 percent in Asia and Latin America, respectively (UN, 2002).

Not surprisingly, of the 20 countries that the UN recently identified with the poorest infant and child mortality rates in the world, only East Timor was outside of sub-Saharan Africa.

It is unconscionable that in this day and age, millions of African children die every year of the most preventable diseases and commonest of illnesses. You can help. Ask us how.